Oregon’s Youth in the Labor Force

Since the spring of 2020, Oregon’s labor force has been on quite a rollercoaster as Oregon and the nation continue to battle COVID-19. It is true for the labor force as a whole, but it is particularly true for Oregon’s youth in the labor force. During the pandemic recession, unemployment rates skyrocketed in the spring of 2020 as many service sector businesses temporarily closed to reduce the spread of COVID-19. From March to April, Oregon’s unemployment rate jumped nearly 10 percentage points, reaching 13.3%. A large share of younger workers were employed in leisure and hospitality, which lost the most jobs in spring 2020. Nationally, the unemployment rate for teens (ages 16-19) jumped to an all-time high of 32% in April 2020. The unemployment rate was nearly 26% for ages 20 to 24, also an all-time high. 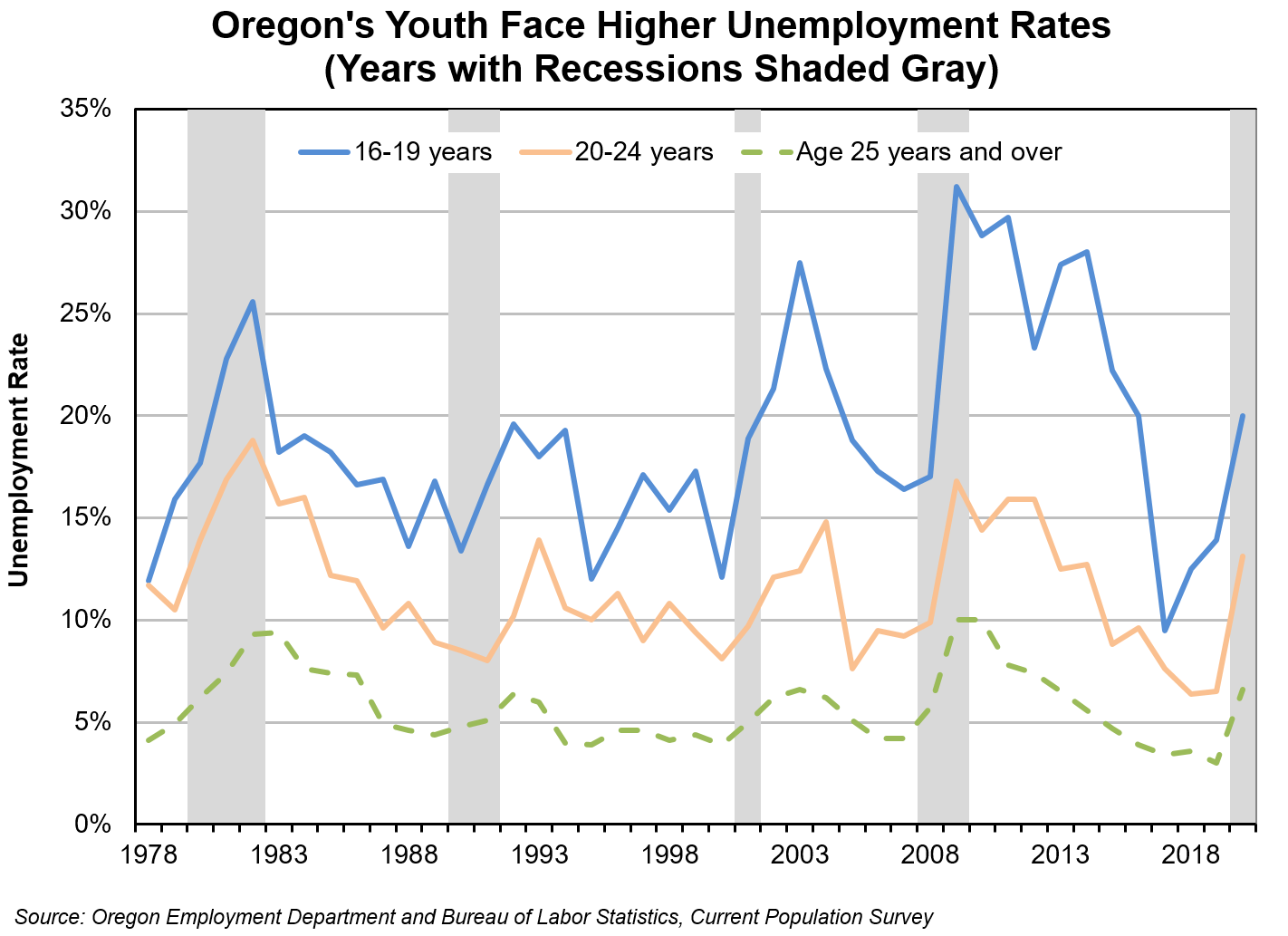 A Tale of Two Recessions

The pandemic recession has been a very different recession compared with the Great Recession that began in 2008. The contrast is sharp when looking at labor force statistics of Oregon’s youth. Although both recessions had steep job losses, the speed of the job loss and the recovery have been very different.

Prior to our recent pandemic recession, youth labor force participation was trending up in recent years, in particular among Oregon’s teens (ages 16-19), reversing what had been a downward slide for over 15 years. Back in 2000, the LFPR of Oregon’s teens was 57%. Since 2000, teens’ LFPR declined until it reached an all-time low of 34% in 2015 and 2016. Since 2016, a tight labor market has helped participation rates trend upward, which has increased teens’ LFPR to a recent high of 43% in 2020. In 2021, Oregon’s LFPR for teens took a step backwards and decreased to 38%. Nationally the LFPR for teens was 36% in 2021. 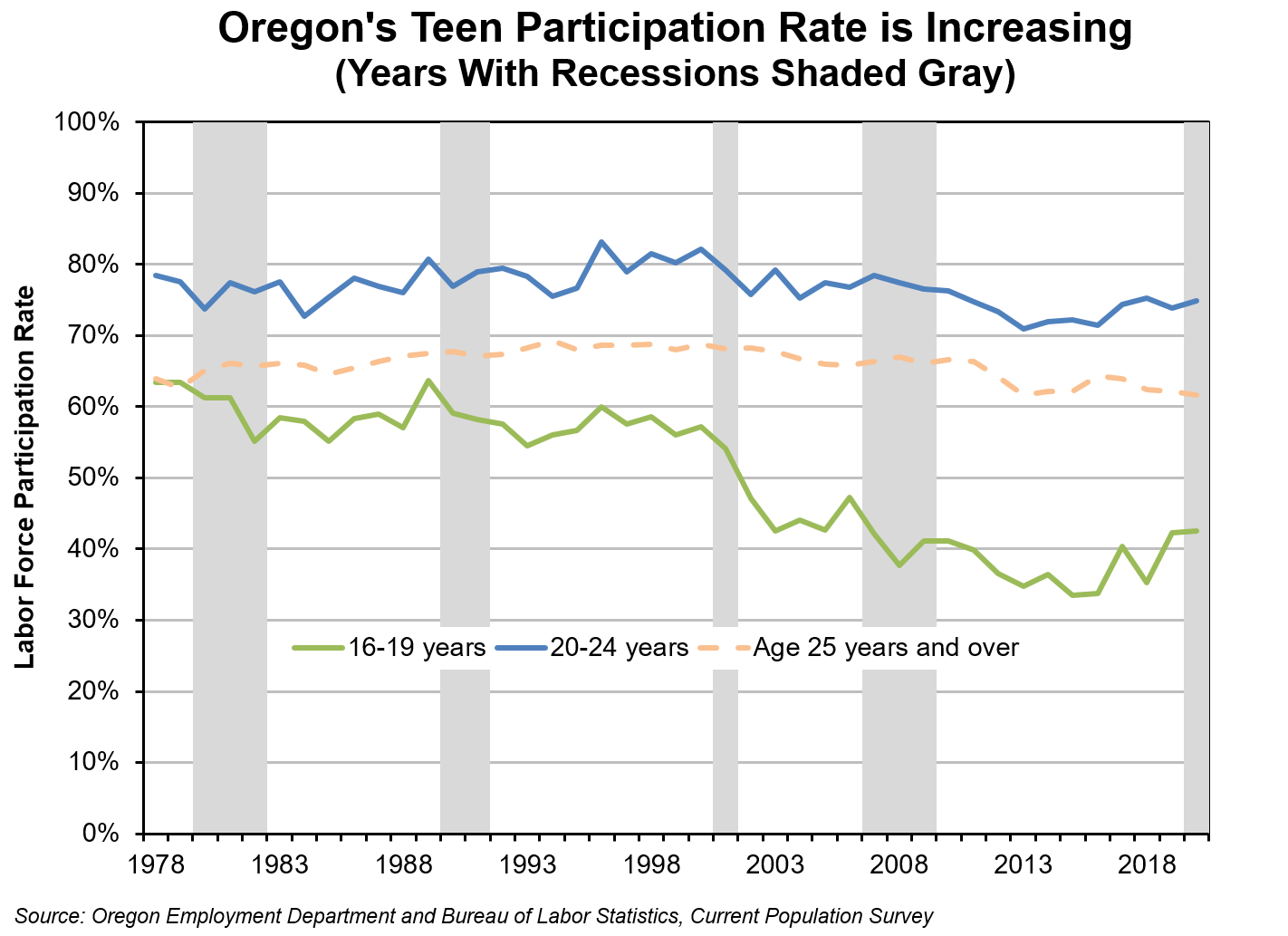 Nationally, the LFPR for teens and young adults has remained fairly steady during and following the pandemic recession. A large number of youth were at least temporarily unemployed, but they did not leave the labor force. We are not witnessing a decline in the participation rate like what occurred during the Great Recession.

As severe as the unprecedented job loss from the pandemic recession was, strong job growth and high demand for workers has occurred much sooner than after other recent recessions. As of August 2022, Oregon regained all of the jobs lost in the spring of 2020, recovering to its pre-pandemic employment level in just a little over two years. Job vacancies in Oregon remain at a high level as employers struggle to fill job openings due to the low number of unemployed Oregonians to fill those vacancies. Oregon’s Office of Economic Analysis is forecasting slow but continued employment growth over the next several years, which will mean continuing strong demand for workers in Oregon.

Opportunities on the Horizon

The strong demand for workers and the current tight labor market isn’t likely to disappear in the near future, similar to the tight labor market last experienced in the 1990s. Maybe not coincidentally, the 1990s is the last time a majority of Oregon’s teens participated in the labor force. We will have to see if in the coming years a tight labor market, employers struggling to find workers, and a historically low unemployment rate among teens will keep the teen LFPR trending upwards.

Efforts to provide young workers who lack work experience with job opportunities could have a beneficial impact on labor market outcomes and lifetime earnings. Youth need opportunities to gain initial on-the-job experience and be successful in the workplace so they can illustrate those essential skills to later employers.

With Oregon’s unemployment rate back near historic lows and a growing economy with high demand for workers, that opportunity for young Oregonians would appear to be right now.