Orchards are not very difficult to find in Oregon. In the Columbia Gorge, one can hardly miss the cherry, pear, and apple orchards. In southern Oregon, pear orchards fill Jackson County’s countryside. The Willamette Valley has a variety of fruit and nut orchards, but more acres in the valley are planted in hazelnuts than any other fruit or nut tree. In fact, the Willamette Valley produces approximately 99% of the hazelnuts grown in the United States.

The first cultured hazelnut tree was planted in Oregon in 1858; retired Hudson’s Bay Company employee Sam Strictland planted it in Scottsburg. The first significant planting occurred several years later in 1876, when David Gernott planted a fencerow of 50 hazelnut trees. And it has been just over a century since George Dorris planted the first commercial hazelnut orchard in the Pacific Northwest in the Springfield area in 1903. In 1989 the hazelnut became Oregon’s official State Nut.

The history of the hazelnut goes back quite a bit further than Oregon’s hazelnut history. Hazelnuts grow in many parts of Europe and Asia and have been a food source for humans since prehistoric times. Hazelnuts have been cultivated for more than 4,500 years. A manuscript found in China from the year 2838 B.C. states that the hazelnut took its place among the “five sacred nourishments” God bestowed to human beings.

Hazelnuts have been known by a variety of names. It has been called the Cobb nut, the Pontiac nut, the Spanish nut and the Lombard. Many people also call them filberts. However, there is some debate about where the name “filbert” came from. Some speculate that the name filbert originated from the Old English term for “full beard,” in reference to the nut’s outer husk. Others believe the name was derived from St. Philibert, because August 22 – a date that corresponds in England to the ripening of the earliest filbert – is dedicated to him.

Whether they are called hazelnuts or filberts, one thing is certain, the hazelnut industry plays an important role in Oregon’s agricultural sector.

From Tree to Market

The process that Oregon’s hazelnut producers use to sell their crop is a bit different than your typical agricultural commodity. The hazelnut industry has established the Hazelnut Marketing Board (HMB), which working through the United States Department of Agriculture (USDA), administers a hazelnut marketing order (HMO). The HMO is a federal law that growers in the industry have requested. The HMB, which comprises both growers and handlers in the industry, meet to determine if they want to have volume regulations for hazelnut sales each year. If the board decides to proceed, a “marketing program” is established which complies with the provisions of the hazelnut marketing order. The Hazelnut Marketing Board has established a “marketing program” each year since 1949.

When the Hazelnut Marketing Board meets to work on the HMO, they decide whether to put the “volume control” provision in the HMO into effect. In essence, the volume control divides the domestic inshell market evenly between all handlers, based on percentages of the overall industry product each handler controls.

As an example, if in a given year the HMB decided that 20% of the annual crop can be absorbed by the domestic inshell market, then each handler can sell 20% of their product in the domestic inshell market. In the industry this 20% is referred to as “free” product. The other 80% is referred to as “restricted” product. The restricted product must be sold in the shelled or export markets.

Although our current data series only starts in 2007, we know that acreage planted in hazelnut orchards grew rapidly during the 1980s. Following the expansion of the 1980s, the growth of acres of hazelnuts in Oregon slowed significantly. In the 1990s and 2000s acreage in hazelnut production was quite flat in the state, showing little growth over those two decades.

One big reason for that long period of slow growth in hazelnut acreage was due to Eastern Filbert Blight (EFB), a disease with the potential to decimate the industry. When we consider the number of trees lost to EFB over the past three decades, the industry actually did quite well to maintain and not lose hazelnut acreage over that period of time. Evidence of the effect EFB has had on the industry can be seen in the varieties of trees growers have planted in recent decades. Growers have replaced older orchards of EFB susceptible varieties and have planted new more EFB resistant varieties developed at Oregon State University. 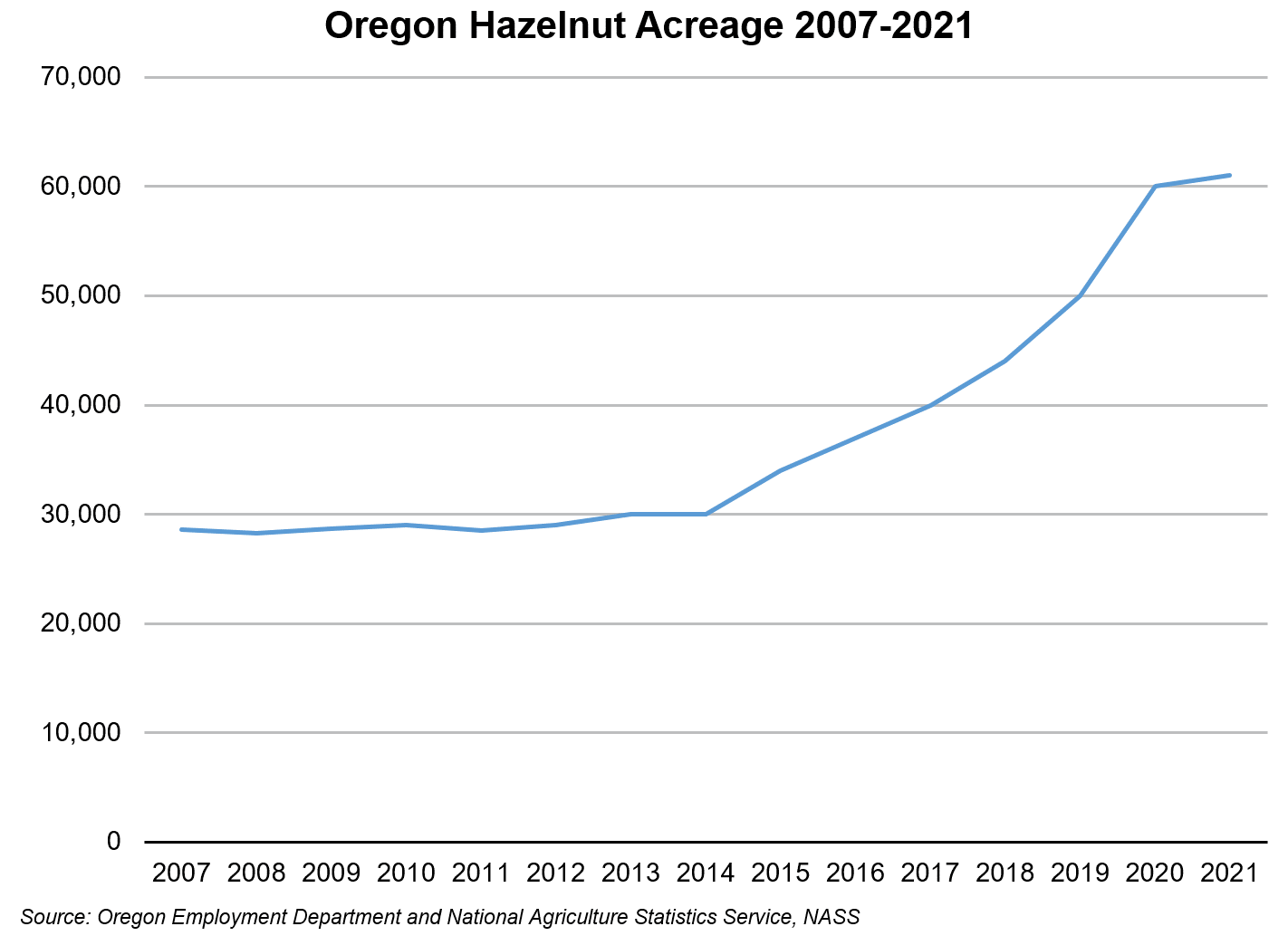 According to estimates from USDA’s National Agricultural Statistical Service the value of Oregon’s hazelnut harvest over the past five years has averaged a little less than $110 million per year. That total only represents the gross income growers received for their crops. Of course the economic impact of the industry goes beyond $110 million when considering the multiplier effect the industry has on the state’s economy.

The manner in which hazelnuts are grown in other parts of the world is quite different than the way they are grown in Oregon. The hazelnut is grown naturally as a bush or multi-stemmed tree. They have been grown in southern Europe and Turkey in this manner for centuries. This contrasts significantly with the tall single-trunk trees we see grown in Oregon’s hazelnut orchards.

The Oregon Hazelnut Marketing Board estimates there are about 1,000 Oregon farms growing hazelnuts in Oregon. Oregon Employment Department (OED) records counted 60 firms in 2021 categorized in the “tree nut farming” industry. These 60 firms that report their employment to the OED are covered under the unemployment insurance (UI) program. There are obviously many more hazelnut farmers than that in Oregon, and the discrepancy is mostly due to the large number of farms that are not covered by unemployment insurance. Many smaller farms that don’t exceed certain payroll thresholds, primarily use farm labor contractors, or almost exclusively employ family members are examples of farms that are not covered.

Polly Owen, manager of the Hazelnut Marketing Board, says, “Many of Oregon’s hazelnut growers are small family-run farms with few employees.” Most of the work is done by the farmer and other family members. One thing that has helped the industry keep down its need for labor is that harvesting the crop is largely mechanized, keeping labor costs down. In Turkey, hazelnuts are still harvested by hand. 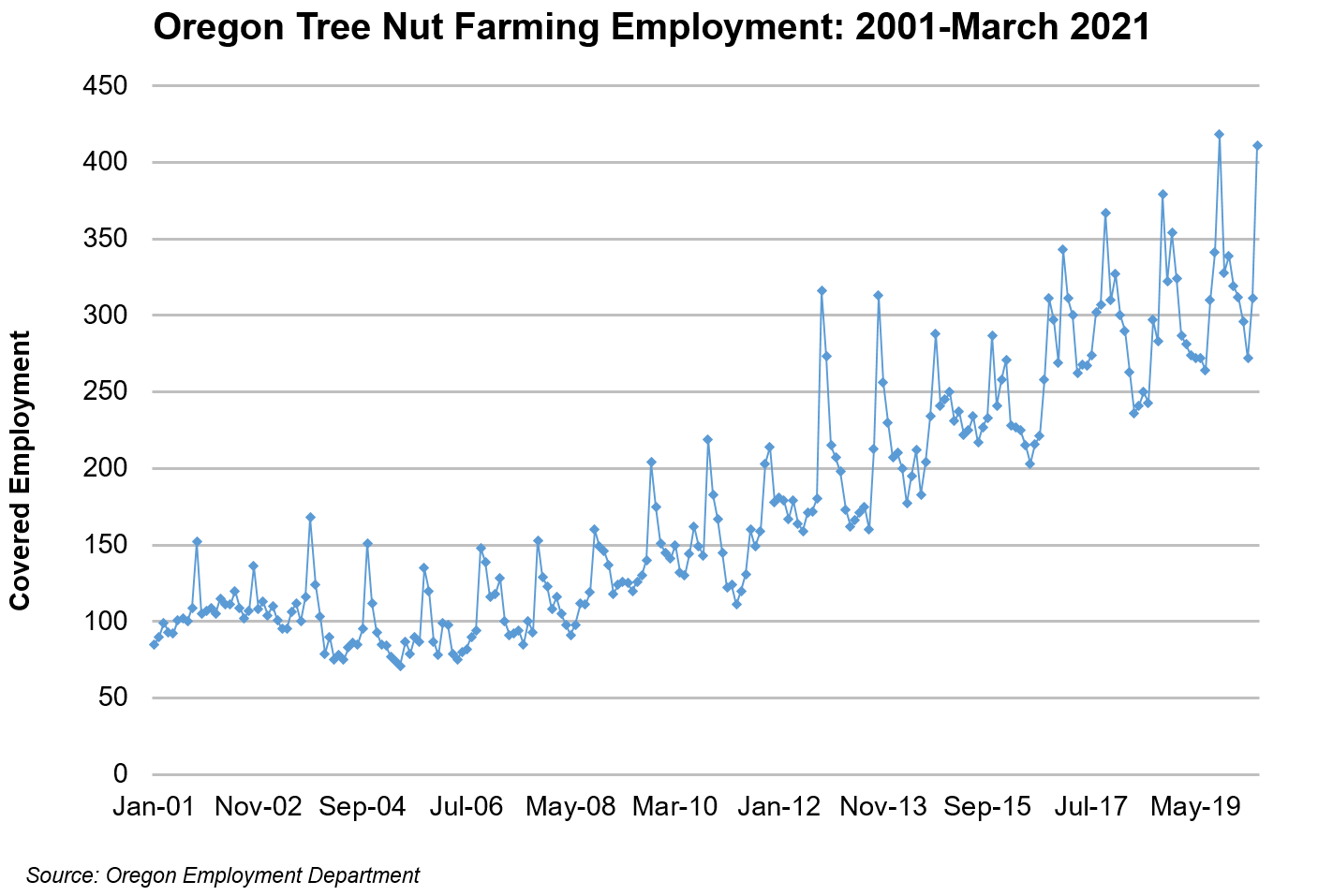 After several decades of slow growth, Oregon has seen rapid growth in hazelnut production since 2014. Driving around the more rural roads of the Willamette Valley and seeing how many young hazelnut orchards have been planted in recent years, it is easy to see that the growth in production will continue for some years to come as the young orchards mature.

We can only wonder if George Dorris realized what he was starting when he planted the state’s first commercial hazelnut orchard more than a century ago. It is estimated that at one point over half of the hazelnut trees growing in Oregon came from Dorris nursery stock.

As for the long term future of the hazelnut industry, we will just have to sit back, snack on some chocolate-covered Oregon hazelnuts, and see what the next century has in store for this unique Oregon industry.