It takes less than 30 seconds on the Oregon Employment Department’s website for labor market information, www.QualityInfo.org, to see that published wages for government workers were different, and usually higher, than for private-sector workers. A quick glance at Employment and Wages by Industry data under the Economic Data tab will show that Oregon’s private-sector workers made an annual average wage of $63,086 in 2021 versus $85,961 for federal workers, $75,934 for state workers, and $65,913 for local government workers. 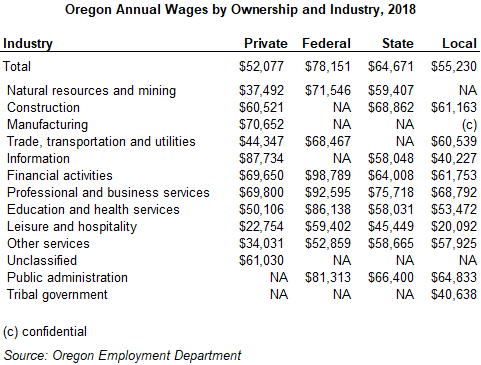 Different industries pay different wages. Manufacturing and finance are well known as high-paying industries; leisure and hospitality is often criticized for paying low wages. Although there are some similarities in industry wages across ownerships, there are many differences. The natural resources and mining industry pays much higher wages under federal ownership than private. This industry is the U.S. Forest Service in federal ownership, and in private ownership it is mostly farming, logging, and their support industries. Trade, transportation, and utilities employment is dominated by the lower-paying retail trade industry in the private sector versus the higher-paying transportation industry (U.S. Postal Service, Trimet) and utilities (Bonneville Power, Eugene Water and Electric Board) in federal ownership and in local government.

This trend of higher pay in the public sector is reversed in a couple industries. The information industry in the private sector (software publishers, telecommunications) pays much higher wages than the information industry in local government (Fern Ridge Public Library, among others). Private-sector finance also pays a higher average wage than finance does to state or local government workers. The state finance sector is mostly portfolio management done by PERS, which pays on average less than half the private-sector wage in portfolio management. Local government finance includes SAIF, an insurance provider.

A principal reason that public agencies have different average wages from private businesses is that they engage in different operations and often employ workers with different skills. Although there can be considerable overlap between the types of enterprises run by governments and private businesses, the emphasis, or number employees in industries, is different. For example, there are government manufacturing and financial operations in Oregon, just not very large ones. And although both public and private schools exist, there are many more workers in public education than private education.

This second table shows employment by major industry and ownership. Ownership is either private, federal, state, or local government. Nonprofit organizations are typically in the private sector and can be in any industry. 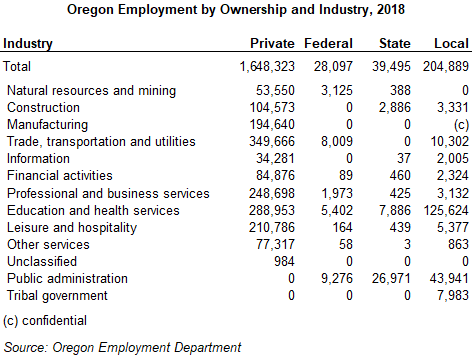 Indian tribal businesses and most public schools, including public universities, are in local government. The roughly 17,000 home care workers in Oregon were officially counted as state government workers in 2017. Since 2018, they have been classified as private-sector workers.

There are a variety of reasons that average wages increase over time. A major reason is that prices also increase. The U.S. Consumer Price Index for Urban Wage Earners for the United States, a common measure for inflation, increased by 19.8% from 2011 through 2021, even more than the cost of living increases received by state government SEIU members.

Aside from general price increases, average wages can change for a variety of reasons. Hours worked, changes in productivity, and changes in the occupational mix of industries also affect how average wages change. Wages are often only part of employees’ compensation. Changes in providing other benefits, such as health insurance, can affect changes in wages. For many public employees complexity is added by legal changes, executive orders, and union contracts. During the pandemic recession and early recovery average wages in many areas actually increased rapidly as lower-wage workers lost their jobs and higher-wage workers remained employed. Gaining back jobs, hours, and benefits can occur differently for different ownerships and industries. 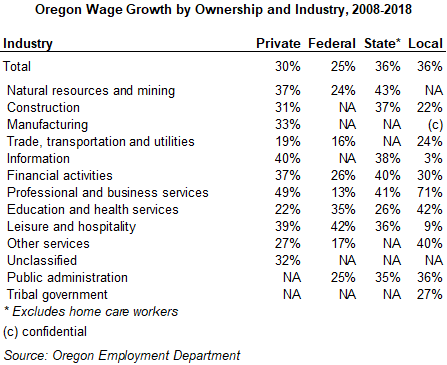 Most industries managed to increase wages more than inflation, but some fell short. Unclassified workers in the private sector had the smallest average wage gain over the period at only 11% followed by federal government other services with a 12% gain. The federal other services industry consists of the two national cemeteries in Oregon. The largest wage gains were in the private-sector professional and business service industry (+77%) and the private-sector information industry (+74%). This industry has grown with the ever-increasing use of computers for business processes, and computer-savvy occupations tend to pay well.

The table shows the 15 most frequent occupations in Oregon for each ownership and their share of the total employment in that ownership. The three most common occupations in the private sector were fast food and counter workers, retail salespersons, and stockers and order fillers. This reflects the size of the leisure and hospitality and retail trade industries and the importance of supply chains in our economy. Not one of these three occupations made the top ­15 list for federal, state, or local governments. In fact, the highest rank that any of these three occupations had in the public sector was the 73rd spot – held by fast food and counter workers in the federal government.

The four different ownerships had only two occupations in common from their top ­15 lists: general office clerks and registered nurses.

Another difference between the jobs in the four ownerships is the hours worked. Full-time jobs tend to have higher average annual wages than part-time jobs, if for no other reason than employees can usually produce more by working more. The Oregon Employment Department collects information on hours worked by employee. The information does seem to have some occasional reporting errors, and it is incomplete for federal workers, so they are not included in this analysis. Nonetheless, the data from 2021 show that private-sector employees worked an average of 1,430 hours for the year; state employees worked an average of 1,722 hours (20% more); and local government employees worked an average of 1,497 hours (5% more). As a reminder, public schools and universities are part of local government, and most schools have a summer break for instruction workers.

Wages and wage growth are important economic indicators and personally important to workers and employers. When comparing wages it is important to look not just at broad averages, but also to look at comparable industries, occupations, and hours worked. Other factors, such as location, working conditions, education, skills, experience, and benefits, also affect wages, but were beyond the scope of the data available for this analysis. These data do show that for private- and public-sector workers, differences in industry, occupational mix, and hours worked are related to differences in average pay.