Occupational Wages in Northwest Oregon in 2022

The average wage in Northwest Oregon is lower than the statewide average, but much of the difference is due to the prevalence of lower-wage occupations in the area – the most common occupation in the region is fast food and counter workers followed by retail salespersons. When comparing wages for the same occupations, Northwest Oregon is closer to statewide levels than the average difference would suggest, and some local occupations even pay more than is typical for the state.

The Oregon Employment Department estimates wages for more than 500 occupations in Benton, Clatsop, Columbia, Lincoln and Tillamook counties combined. The highest-paying occupation in the region with a published wage was family medicine physicians which had an estimated annual average wage of $257,791 in 2022. Most of the occupations with higher wages were in medicine or management, although some specialty occupations such as physicists, judges, wholesale sales representatives, lawyers, engineers, software developers, and electric power-line installers, earned more than $100,000 per year. The lowest wages, $29,935 per year, were for restaurant hosts and hostesses. Dishwashers ($30,404 per year) and food preparation workers ($30,774) were also among the lowest paid occupations. Childcare workers were also a lower-wage occupation with an annual average wage of $34,129, though that was an improvement from the year before.

Not all occupations in the region have published wages. This may be the case for confidentiality reasons (only one or two firms employ an occupation), if only a few employees work in the occupation (too few in the sample), if the occupation is primarily self-employed (such as farmers), for some occupations if the wage is more than $208,000 per year, or if the wages reported in the sample for Northwest Oregon are substantially different than those for other regions (an indication of poor data quality).

It may also be the case that wages for very specific occupations are not reported. For example, the wages for registered nurses are reported but the wage survey doesn’t distinguish between operating room nurses and cardiac care nurses.

Not only are occupational wages typically lower in Northwest Oregon (and other rural areas), but the region has many jobs in low-wage occupations. The most common occupation is fast food and counter workers. Retail salespersons, cashiers, waiters and waitresses, cooks, and maids and housekeeping cleaners, are other common occupations. 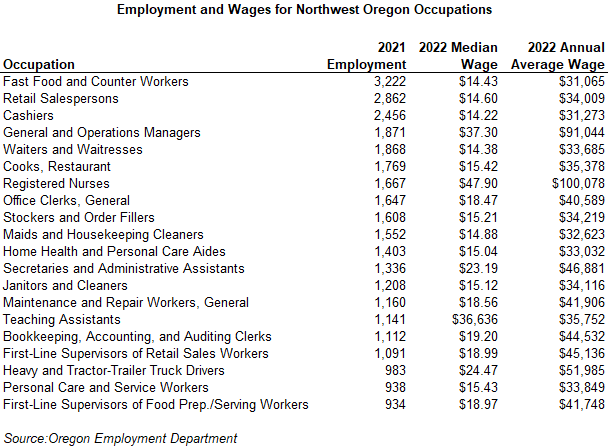 The wages for these and a few other more common occupations are given in the table. Wages in Northwest Oregon usually follow the same pattern as they do elsewhere. Wages are usually low for occupations requiring less education and fewer skills and higher for occupations demanding more preparation and investment in training and education. Because so many jobs in Northwest Oregon require few skills, wages are often in the $15-$24 per hour range. Wages for more skilled occupations, such as truck drivers and registered nurses, are higher. The median wage for all occupations was $19.91– about the same as the previous year. But the median wage doesn’t tell the full story on how wages are changing. In the tight labor market of 2022 wages for lower wage occupations seemed to increase fairly rapidly. The lowest-wage occupation in 2022 paid nearly $30,000 per year. In 2021 there were 10 occupations that paid less than this amount. The lowest-wage occupation in 2021 was paid $27,867 per year, meaning that the lowest paid occupation in Northwest Oregon saw a wage increase of 7.4%.

Wages for other occupations can be found at wwwqualityinfo.org by following the link to Jobs & Careers then the Occupation & Wage Information and searching for the occupation of interest. 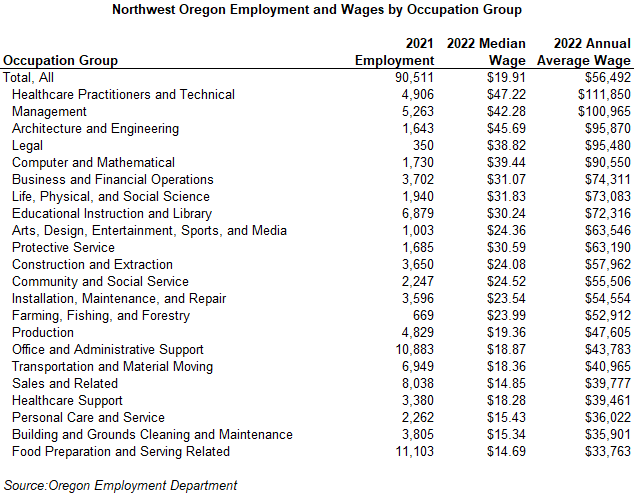 Lower-wage occupational groups, including food preparation and serving, building and grounds cleaning and maintenance, personal care, and sales occupations, are filled with specific occupations that generally require less education. Some specific occupations in these lower-wage occupation groups do pay well. For example, some sales people make very high wages. Sales engineers had average wages around $111,000 per year. Wholesale sales and construction are generally recognized as two occupational categories where it is possible to make above-average wages without having formal post-secondary education or training.

Wage data presented here are collected through the Occupational Employment Survey (OES), a semi-annual survey measuring occupational employment and wage rates for payroll workers by industry. In Oregon, the survey samples more than 6,000 establishments a year, taking three years to fully collect the sample of 19,000 establishments.

More detailed information is available in the Oregon Wage Information publication that is updated each June at www.QualityInfo.org.