How long do workers stay in a given job? Nationally, the average employee tenure in January 2022 was 4.1 years. Data to address this question isn’t available for Oregon, but every two years the U.S. Bureau of Labor Statistics publishes this information for the nation.

Data back to 2006 show little variation – job tenure has been fairly consistent over the last 15 years. A slight peak was reached in the January 2012 results, which is probably the effect of workers staying longer in the jobs they held – if they managed to hang on to them – when the nation entered the Great Recession, which lasted from late 2007 to the middle of 2009. These figures don’t suggest much about the effects of the pandemic; although tenure of public sector workers rose a bit between January 2020 and January 2022, which could reflect some workers staying in their public-sector jobs through the pandemic and waiting out the uncertainty. 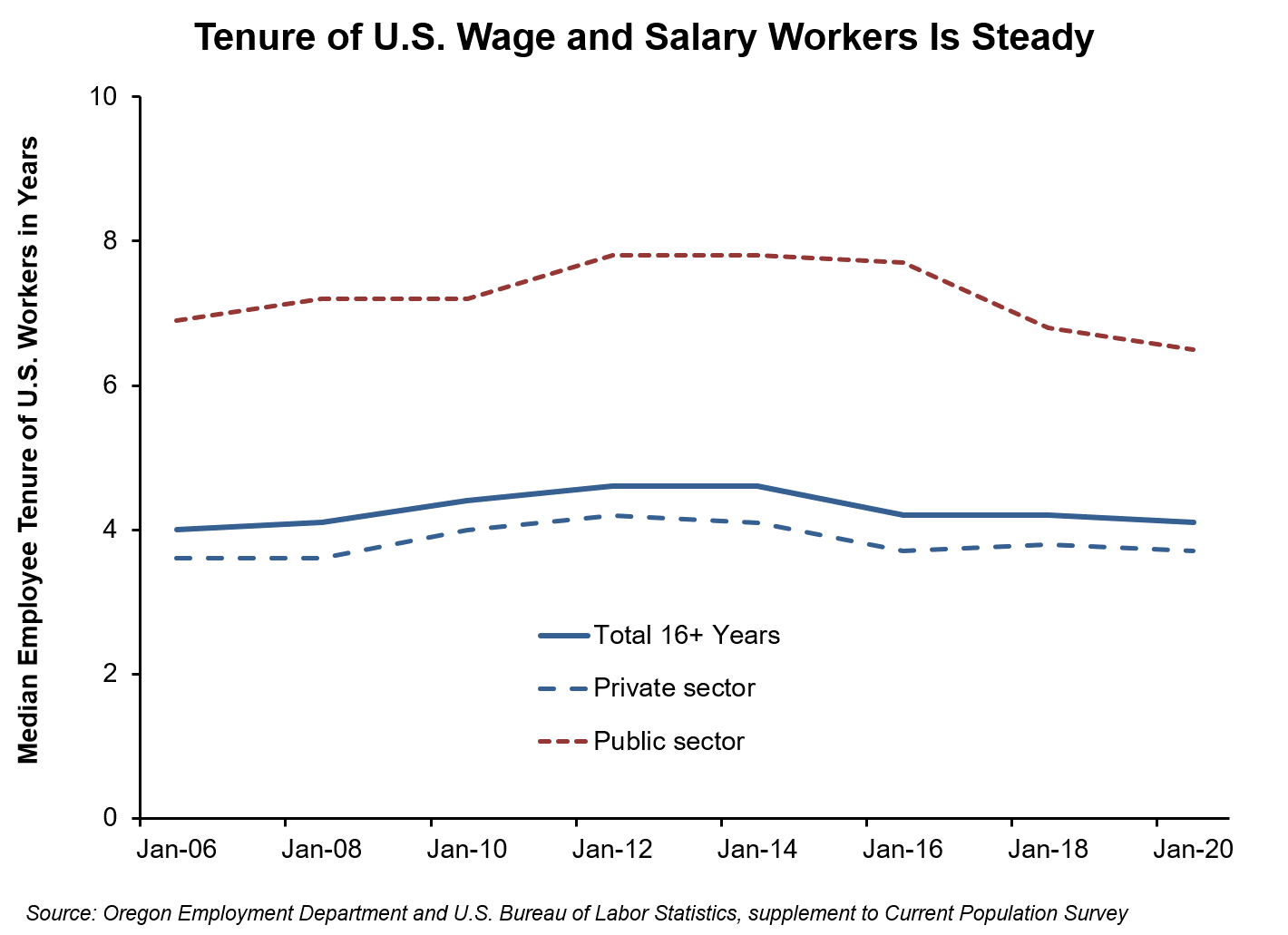 Age seems to be the major determining characteristic in employee tenure. Younger workers have far shorter tenure in their jobs than older workers, which is somewhat obvious due to their shorter work histories. Younger workers face a lot of transitions in a short timespan that also work to reduce job tenure – from short-term summertime jobs to leaving for college in a new city or state. On average, teenagers spend less than a year in each position, and for those ages 20 to 24 the median tenure is 1.2 years. With each successive age group the median tenure rises, topping out at a median of almost 10 years for workers ages 55 and over. 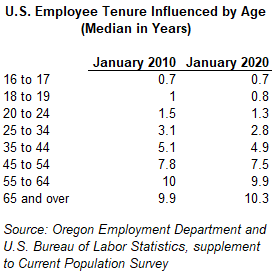 There’s been very little movement in median tenure among the different age groups over the past decade. Teens are just as likely to be transitioning between jobs (and holding a lot of jobs as they gain experience) as they were a decade ago. Older workers are just as likely to have been with their employer for a much longer timespan.

The 2020 column illustrates that the pandemic didn’t change the overall tenure of U.S. workers in any age group by much. Tenure changed the most for workers ages 45 to 54, dropping from the 7.5 year median in January 2020 to 6.9 years in January 2022. This age group also saw the largest change in tenure over the decade, with the median dropping by almost a full year since January 2012.

Workers Stay Longer in Some Types of Jobs

It may come as no surprise that management occupations have the longest tenure among occupation groups. Workers in management occupations had a median tenure with their current employer of 6.2 years in January 2022. That doesn’t mean they were necessarily a manager for the entirety of their tenure – this would include workers who began in another role and moved into management with the same employer, because the data measure a worker’s time with an employer, not their time in their current role. Median tenure was also longer than five years in protective service (6.0); education, training, and library occupations (5.5); and architecture and engineering (5.2).

On the lower end of employee tenure, workers in food preparation and serving occupations had been with their current employer for a median of just 1.6 years. Personal care and service workers averaged 2.7 years with their current employer. Health care support occupations had a median of 2.9 years. Food preparation and personal care occupations have a lot of part-time and low-paying jobs. Many workers have their first jobs in these occupations, but move out of these jobs as they gain education and experience. For health care support occupations, the low tenure may speak to career pathways where workers gain health care experience in entry-level roles while pursuing more training.

There’s not much difference in the employee tenure of men and women, though men’s tenure has consistently come in just slightly above women’s tenure. Women’s median in January 2022 was 3.8 years, and men’s median was 4.3 years.

Another characteristic that doesn’t hold much power over tenure is education level. Keep in mind that the youngest workers aren’t included in these calculations – the data only includes workers ages 25 and over, because education levels aren’t expected to change much, on average, after age 25. Workers with less than a high school diploma had the shortest tenure, at 4.5 years. Those with some college but no degree had a median of 4.8 years. Workers with doctoral or professional degrees had the longest tenure, at 5.5 years, and those with master’s degrees had a median of 5.2 years. All other education levels were clustered right around five years of tenure.

Employee tenure has been very steady on average; it averaged 4.1 years in January 2022 and has been between 4.0 years and 4.6 years over the past 15 years. Tenure for older workers is longer than for younger workers. The relationship between age and tenure has held over time and age seems to be the only individual characteristic with much power over median job tenure. Today’s young workers – and older workers – are behaving much as those groups have in the past in terms of how long they stick with their employers.